Proper lighting can greatly improve the commercial appeal of chain stores, as well as help achieve other benefits. Find out more about what happens when the lighting of over 20 stores instead of a single store is redesigned to better serve the chain concept.

Motonet is a successful Finnish specialist retail chain. Established in 1990, the company has expanded strongly into a network of 35 stores, extending from the metropolitan area to Rovaniemi in the north and all the way to Estonia. In addition, to spare parts and accessories for cars, there is a wide range of tools and home and leisure products on offer.

Motonet’s success is the result of highly systematic development work. The company and its owner, Broman Group, have developed their operations on a long-term and responsible basis. An excellent example of this commitment is that Motonet has been one of the first in the industry to use light to build a successful business.

In recent years, Motonet stores have switched to LED luminaires, especially for energy saving reasons. The LED lighting reform has been carried out in all the properties owned by the company. Due to long leases, energy-efficient LED lighting has been considered a profitable investment also in some of the stores operating in leased premises.

In addition to energy savings, the redesigned LED lighting was also influenced by the inadequate illuminance in stores as experienced by Motonet customers and staff. Other major factors behind the reform included smart control possibilities of modern lighting and the difficult maintenance of obsolete lighting in some stores. Modern LED technology significantly reduces the need for maintenance of luminaires compared to old mercury and fluorescent lamps.

Lighting to support the store concept

In Motonet stores, lighting is seen as an important improvement factor in terms of commerce. For example, colourful fishing gear, clothing and motorcycling accessories need to be attractively displayed in stores, and lighting and colour rendering play a key role in this. An adequate overall illuminance in stores is achieved by using LED-luminaires tailored to the need.

At Motonet, all decisions are made at the chain level, but each store is individual.  After the reform, all Motonet stores have adequate illuminance and smart DALI light control. Implemented by Greenled, DALI control is managed through the Osram ENCELIUM™ lighting control system. Each store luminaire can thus be individually adjusted from the Joensuu headquarters if needed.

According to Motonet’s experience, when designing a large-scale lighting project for the entire chain, it makes sense to slightly overscale the lighting to meet future needs. For example, instead of the indicative 900 lux level, 1,300 lux store lighting significantly increases the flexibility of lighting. Lowering the lighting level is easy with smart control. Limiting power also saves energy and extends the lifetime of luminaires, compared to a situation where lighting that is inherently undersized is constantly run at maximum power.

With the lighting reform, Motonet stores have also carried out commercial pilots with lighting and smart DALI control. Concrete examples of this are shelf-specific lighting experiments and spotlights placed near checkout areas at a height of about three metres to showcase selected products to increase sales. An energy-efficient spot lighting solution supports the chain concept and adds to the comfort of the store environment. 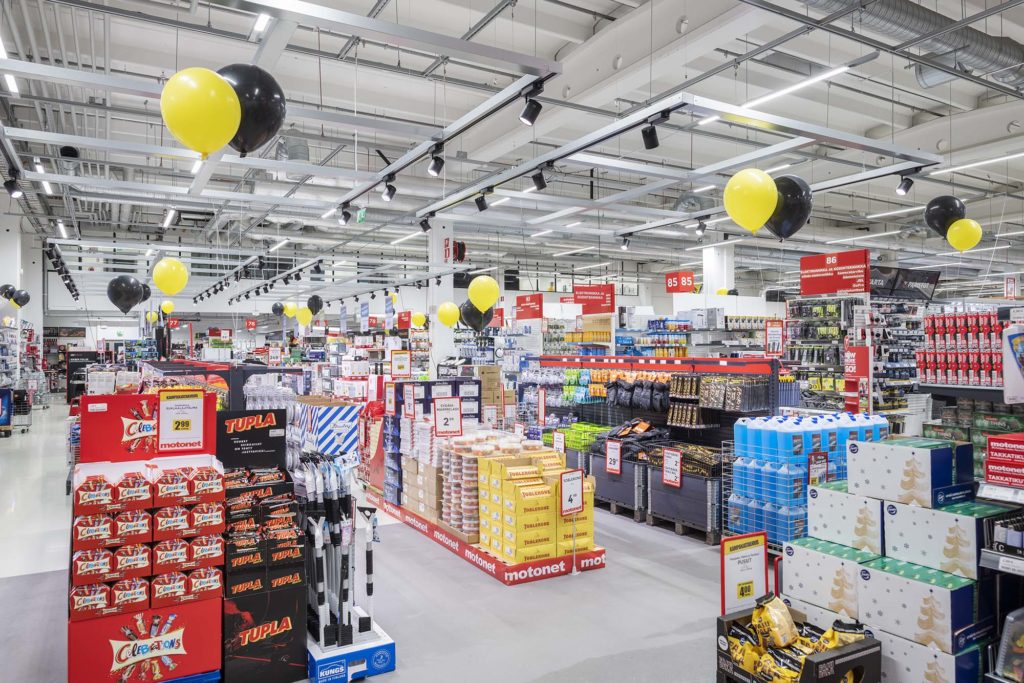 Picture: An energy-efficient spot lighting solution supports the chain concept and adds to the comfort of the store environment.

The effects multiply at the chain level

The switch to LED lighting has improved the lighting power of Motonet stores in an energy-efficient way. For example, in the Roihupelto store, Greenled’s lighting has achieved 62% energy savings compared to the old lighting. The total energy and maintenance cost savings over a decade will amount to a staggering EUR 250,000. The effects are huge when the benefits are multiplied for many stores.

Greenled has played a key role in the major lighting reform of Motonet stores. The old lighting in the stores was replaced via turnkey implementations, which mostly took place at night. This way, the daily commercial operations of the stores were not interrupted.

The upgrades have brought a lot of positive feedback from customers and staff in the Motonet stores that used to have poor, clearly underscaled lighting. It is also positive to note that the lighting reform has not caused additional work for the staff as Greenled has been responsible for the professional installation of the luminaires.

Mutual trust, good planning and keeping to schedules are essential to successful lighting reforms. As proof of the smooth cooperation, Greenled has also been involved in other major lighting projects within the Broman Group.

The Motonet lighting reform in a nutshell

Thinking about the benefits of new lighting?